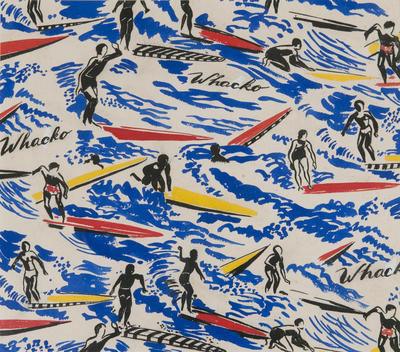 About this object
Acrylic on paper featuring a white background with waves and surfers on yellow and red surf boards. The word Whacko, the title of the work, is interspersed between the surfers.

The use of text on fabrics was something Avis Higgs began using in her work with Victory Loan fabrics. In Whacko, Higgs has replaced the official language of war propaganda with then contemporary Australian surf language. It was not until decades later that the niche marketing of surf fabrics, complete with surf slang, became common place.

Credit line
gifted by Marguerite Beere. Reproduced by kind permission of the Estate of Avis Higgs